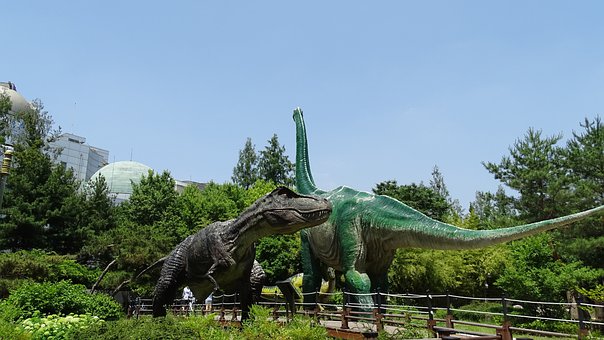 Almost all the dinosaurs in the list of dinosaurs with incredible height are sauropods.

Sauropods are the classification of dinosaurs which consist of four-legged and long-necked dinosaurs. Almost all the sauropods were herbivores. They used to walk on four feet. Their long necks had helpful in eating plants and fruits from long trees.

Sauropods are considered to be the largest ever species on the Earth. Even the smallest sauropods (Dwarfs) are considered to be 20 feet long which is equal to 4 adult males. They mostly had lived near the lakes and rivers. They had relatively small heads according to their body size. The largest-ever sauropod found in the Dreadnoughtus whose length is considered to be 85 meters.

Here is the list of dinosaurs with incredible height:

Dreadnoughtus had lived 76 to 70 million years ago. His almost complete fossils have been found in 2009. Dreadnoughtus’s name means “Fear-Nothing”. This name was given by Paleontologist Kenneth Lcovara.

An amazing fact about this sauropod is that they had not grown fully when they died. It means if they live longer than their actual life span, they could grow more and can be at the height of 85 feet to 100 feet or more.

Argentinosaurus comes 3rd in our list of dinosaurs with incredible height. Argentinosaurus came into science in 1993 and 1987 with evidence. They had lived 96.2 to 92.19 million years ago in the Late Cretaceous Period.

The most updated length is discussed by Paul in 2206 which is 35 meters long.

Austroposeidon is considered to be the largest dinosaur in Brazil. In the list of dinosaurs, it comes on 4th number. An adult Austroposeidon had 82 feet long. Austroposeidon was first discovered by Presidente Prudente Formation by paleontologist “Llewellyn Ivor Price”.

Austroposeidon had lived 83.6 to 66 million years ago. Austroposeidon was an herbivore that only prey on vegetations and plants. The main threat to this giant creature was only natural disasters.

Saltasaurus means the “Lizard from Salta”. This species had discovered in Argentina between 1975 to 1977 by Jose Bonaparte, Martine Vince, and Juan C. Leal. In the list of dinosaurs with incredible height, this dinosaur is unique and also unique in the sauropods group. This is the only sauropod with armored on its back.

The maximum length of Saltasaurus is considered to be 8.5 meters (27.88 feet). Saltasaurus was named Saltasaurus because of its discovery in the city of Salta in northern Argentina.