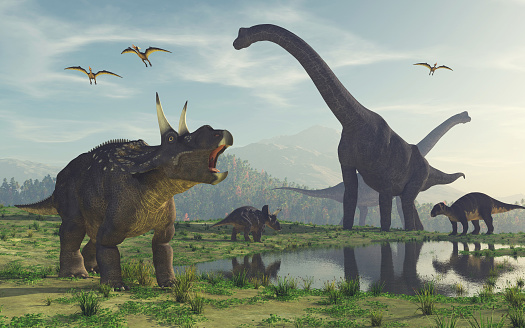 According to experts, roughly 700 species are discovered and named according to their specifications or structure. Following are different types of dinosaurs in a list:

Theropods lived in the Carnian Age of the late Triassic about 221 million years ago. Theropods were reptile-hipped dinosaurs. They were hollow bones and three-toed limbs. Theropods could walk on two feet. They were carnivores from their ancestors but they evolved themself into herbivores, omnivores, and insectivores, etc.

Nyasasaurus was the first species of dinosaurs on Earth. It also looks like a theropod but there is no evidence of Nyasasaurus to be a theropod.

Theropods lived about 232 million years ago. The first therapod’s fossils were found in Northwestern Argentina which was about 230 million years old. The largest-ever theropod was 9ft high and its weight was around 120kg. The smallest theropod was “Troodontid Anchiornis Huxleyi”, 1ft in length and 110 grams in weight.

Sauropods were also lizard-hipped dinosaurs as theropods. They were long-necked, small heads, and long tails dinosaurs. Their heads were small as compared to the size of their body. They have lived around 215 million years ago in the Late Triassic and late Cretaceous.

Sauropods name Sauropoda means “Lizard Foot”. These dinosaurs were very large. Their complete fossils have not been found yet.

From other different types of dinosaurs, sauropods were plant-eating dinosaurs (Herbivores). They use to walk on four legs.

Sauropods had an “air sac” system which reduced the overall weight of massive necks. Sauropods could also swim. Nigersaurus was a sauropod with 500 teeth who were changes his teeth after 15 days.

Ornithischians were herbivores with a pelvic structure similar to birds. Two groups of this specie were survived the extinction event. These groups are Ankylosaurus and Cerapods. Ornithischians contain dinosaurs with horns and armored dinosaurs.

Ceratopsia was a group of herbivores and dinosaurs with horns. They were from the generation of ornithischians. They lived 161 million years ago and were killed in the extinction event, 60 million years ago. They were 1 to 9 meters in height and 23 to 9,100 kg in weight.

Centrosaurus and Triceratops are well-known dinosaurs with horns.

You can also watch a documentary here:

4-Legged Dinosaur with Spikes on Back – Stegosaurus